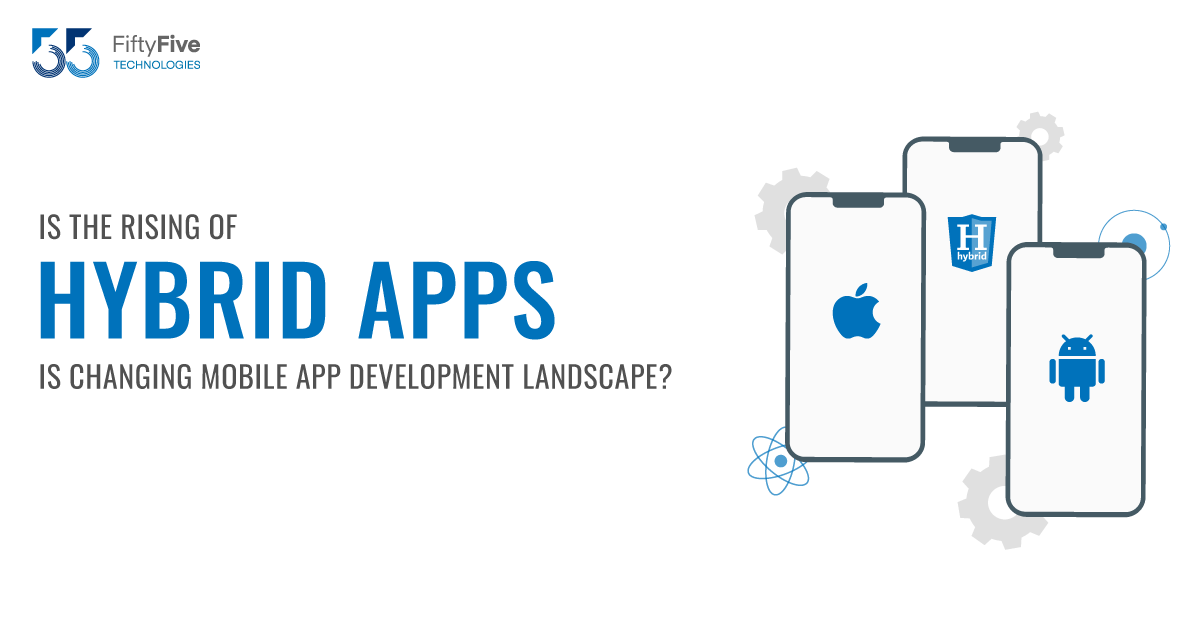 Is The Rising Of Hybrid Apps Is Changing Mobile App Development Landscape?

The Hybrid apps are gaining traction in the mobile app trends. Let me explain what is hybrid app in a lucid manner “It is the mixture of native and web app”. Around 74% of the top 50 iOS retail shops in the United States are hybrid in nature. Are you flabbergasted to know this?

Let’s validate this figure by extracting the drivers which are responsible for the growing popularity of Hybrid apps globally:

1.    Growth of mobile app usage: There has been a significant change in consumer behaviour, this due to the increase in the smartphone usage. People spent around 87% of their time on using different mobile apps. This led to a spurt in the mobile app download which is expected to reach 258 billion in 2022 from 205 billion at present.

3.    Importance of App Store Optimization: Hybrid app development also contributes to the performance of the app. One of the effective ways of hybrid app development is to incorporate lightweight UI. User experience is one of the important factors that may affect the app’s ranking on the App store or Google play store. In order to make the app rank first so effective app store optimization strategies need to be employed. Here the role of Hybrid app development is important and it benefits the ASO strategy as well. The Hybrid app development takes care of not to overuse images or any other visualization. If the images are heavily used then it impacts interface and user experience because the page loading time gets increased and the users of the app might find this excruciating. So, Hybrid apps are helpful to ensure better UI into practice in the development stage for seamless customer experience. Some taxi booking apps are the great example as they are hybrid apps and they enable customers to book taxis in a seamless manner. They are one of the best examples of successful user experience branding in the marketing stint.

4.    The faster evolution: This has led to increased popularity of Hybrid apps. The hybrid apps offer shorter timeframe for the app development, reduced cost and increased scalability.

This had led to the popularity of Hybrid apps. Now, let’s dig in to answer the quest as to “Why companies are switching from native to hybrid mobile app?”

a.    Compatibility: In hybrid apps the app developers are supposed to write a single code base and that too once and this makes hybrid apps a good option as they are compatible to multiple operating systems. While the native apps require usage of separate codes for iOS and Android.

b.    Scalability: App developers no need to fuss up because they are not required to write different codes as the case with native apps. It so more convenient to deploy hybrid apps. When the developers make app for android, they use single code. If they plan to launch iOS app then just a little modification and tweaking is required in the single code and it can be easily launched for iOS. Hybrid apps also contains native elements as well in order to provide better user experience.

c.     Look & feel of native apps: Hybrid apps uses web technologies like CSS, JavaScript and HTML. Even though they are made with help of web technologies, still there is a presence of the look and feel which is akin to the native apps, similar user experience and the capability to function on multiple platforms.

d.    No need to blow up your bank: It implies that there is no need to have deeper pockets to invest in hybrid app development. The cost of developing hybrid mobile app is less costly than building native apps. Since the developers need to write a single code that is why the cost of development (initial & maintenance) is lower. It attracts a cost savings of around 30-90% and this makes hybrid app much more lucrative than native apps in terms of affordability.

f.      Quick Market Penetration: It has a strong market penetration as behemoth companies like Amazon, Nike and even the Start-ups are investing in the hybrid app development. Currently Hybrid HTML5 will also surge like a tide to get its hold in the market.

This data gives a current picture about the mobile operating system market on the basis of platforms. There are plenty of mobile operating systems. It can be deduced from the given data that Android and iOS combined have captured a lion’s share of the pie (i.e., 99.32%) and Samsung and other have the meagre percentage of the share. There is a great opportunity for both Hybrid and Naïve app development as the development of mobile app depends on the selection of operating system so there are differences like in programming language, patters of UI this presents an opportunity for hybrid app and native app development.

These trends are in the form of the objective opinion which I wanted to capture. I also want to share a subjective opinion that these are the trends which shows the popularity of Hybrid apps. In the app development battlefield, both Hybrid and Native apps are weapon to win the customers. It is too early to infer that Hybrid are better than Native because each of them has their own merits and demerits. It depends upon the nature, size, objectives, budget, what kind of app it wants to build, strategic intent of the companies. Bunch of other factors like time to market, development cost, best user experience, availability of new features, number of skilled developers available, performance, human resource costs, degree of customization to be achieved, increased reach, nature of complexity of the app (if the app is too complex enterprise app, then hybrid app development could be a costly affair for some companies, time for testing and quality. These factors should be taken into consideration while deciding which app development model should be adopted.